After languishing in the WordPress.org Plugin repository for almost three years the To Do List Plugin has finally been updated! In fact it has been completely rewritten and is now fully compatible with the latest version of WordPress (3.4 at the time of writing). 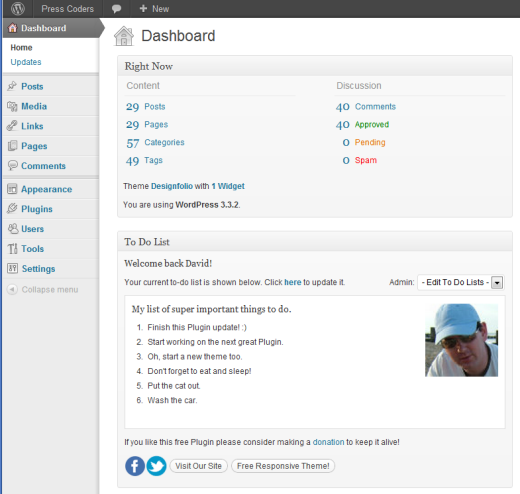 This major update is pretty much what I had in mind for the original version of the Plugin. So, what’s new?
END_OF_DOCUMENT_TOKEN_TO_BE_REPLACED

Most people never need to edit the WordPress constants in wp-config.php but if you do then up until now there was no alternative but to edit the file manually.

However, the Config Constants Plugin changes this by allowing you to modify a select set of WordPress constants directly from the WordPress admin! 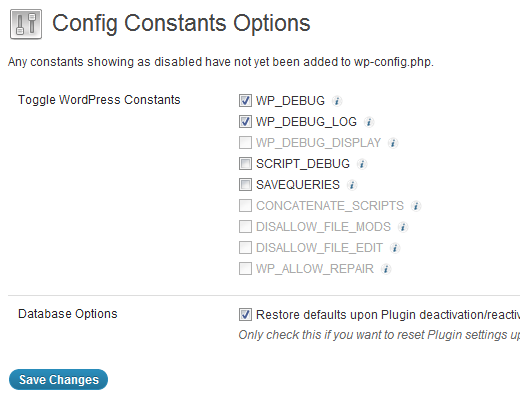 You can only modify constants that are already defined in wp-cofig.php so you remain in full control of your configuration file at all times.
END_OF_DOCUMENT_TOKEN_TO_BE_REPLACED

If you have ever uploaded many images/videos etc. via the WordPress media uploader you will now that it can be pretty tedious to have to manually edit the title for new media items.

‘Format Media Titles’ is a new Plugin to automatically format the media title for new uploads. It works by replacing characters such as hyphens, and underscores, with spaces. The title can then be capitalized by a method of your choice.

See the image below for a before and after view of the same image uploaded with and without the Plugin activated. 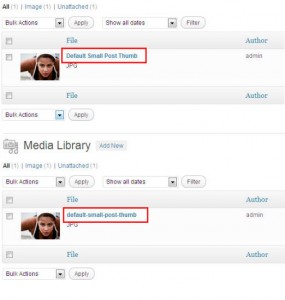 Just a quick post to let you know about a new Plugin we have just developed, called ‘Display PHP Version’. END_OF_DOCUMENT_TOKEN_TO_BE_REPLACED

The EXT JS 4 library from Sencha is a powerful Javascript framework for building rich and interactive UI’s for web applications.

Here at Press Coders we have been experimenting with the new version of Ext JS and are now starting to integrate our efforts into WordPress 3.1 as well. END_OF_DOCUMENT_TOKEN_TO_BE_REPLACED

OK, it’s been a while since our last Plugin release, so we are pleased to announce a brand new one hot off the press! What does this one do? Well, if you have used a beta version of WordPress 3.1 you will know that on the front end of your blog pages you now have displayed, by default, an admin bar. A screen shot of this is shown below.

The admin bar gives you a menu full of quick links to your WordPress admin panel. A lot of users don’t seem to like the admin panel displayed at the top of every page, and so seek ways to disable it or remove it. You can easily disable it on a per user basis via a users profile page, as shown below. 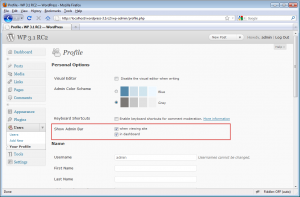 However this is not that useful if you want to remove it site-wide. The Admin Bar Minimiser Plugin was written to help users keep the admin bar active but be able to minimise it at any time to make it less obtrusive. You can see a demo of the Plugin in action in the following video:

As you can see, the Plugin works by allowing you to minimise the admin bar from view via a single click. You can bring it back just as easily. This also works for the admin bar displayed on the WordPress back end too.

Don’t forget though, to be able to minimise the admin bar on the WordPress back end too, you will need to enable it for the currently logged in user. This is because the admin bar is not enabled by default for WordPress admin pages. However it is for front end pages.

The Plugin will be live in the WordPress repository soon, we are just waiting for the Admin Bar Minimiser SVN repository to go live.

Since the demo video above was recorded I have added an options page for the Plugin. This allows you to set whether the front end, and back end shows the admin bar maximised by default. I would love to hear what you think about the Plugin, and how useful you think it is going to be to you once WordPress 3.1 is here.

Just an update on our recent activity. As someone pointed out to me just yesterday the blogs have been fairly quiet since May. Well true, but this certainly does not mean that we have been idle, far from it!
END_OF_DOCUMENT_TOKEN_TO_BE_REPLACED

I have now written a Plugin options starter kit for people who want to learn how to put together a Plugin options form using the WordPress Settings API. You can see more information about the Plugin and download the latest version here.

Have fun, and be sure to let me know what other features you want added in future versions!

In this post I discuss the WordPress Settings API and how you can leverage them for use in your own plugins. Firstly there is coverage of the API in general and the various functions available together with their usage. After that there is a tutorial section with an example walk through of how to add options to a new sub menu page under the Settings Menu.

The Settings API was first added in WordPress 2.7 to make things more efficient when it came to adding options pages for your plugins (and themes) to the WordPress admin area. Until recently I was still doing things the ‘old’ way which involved doing all the form creation and submission handling yourself, checking for $_POST variables, manual security checks etc. Whilst this worked fine it was also cumbersome and time consuming to implement, and making changes was awkward.
END_OF_DOCUMENT_TOKEN_TO_BE_REPLACED

We are pleased to announce a new plugin in development which should be ready for testing next sometime next week, with a release into the WordPress.org repository soon after. This plugin adds a global sitemap to your WordPress website so that users can easily see all of your content (posts/pages) on a single page. Simply add a Shortcode to a new page (or post), click publish and you have an instant sitemap! END_OF_DOCUMENT_TOKEN_TO_BE_REPLACED