I recently needed to add some code just before the closing header tag on my theme pages, via a WordPress Plugin.

Of course, I made use of the wp_head action hook which is perfect for this task. However, my requirement was a little more specific than this. What I actually needed was to make sure the code was guaranteed to be the LAST code added right before the closing head tag.

This is a little tricky because there are probably lot’s of functions registering with the wp_head hook every time one of your theme pages loads. To see this let’s use a slightly modified version of the excellent list_hooked_functions() function which can be found on WpRecipies (authored by Rarst) here.

Our modified version of this function just changes the formatting slightly. The code for this is below.

Adding our modified version of this function to the Plugin (and adding a call to it) gives us the output below. 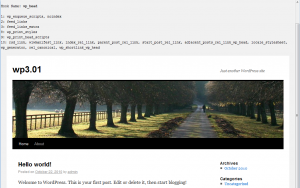 It is important to add the call to list_hooked_functions() function from the plugins_loaded hook, as follows:

This ensures that all Plugins have loaded and registered their hooks, before we attempt to access the list of callback functions.

As you can see, there are many callback functions already defined for the wp_head hook, and that’s without any callback functions we wish to add ourselves! The functions called for the wp_head hook are listed by priority number, and this is the order in which they will be called during a normal page load (i.e. highest number = lowest priority, and will be called last. This is easy to get confused so watch out!).

So, as a solution to our problem I could simply add my callback function for the wp_head hook and assign it a very high value (i.e. very LOW priority). Well, this would work in most cases but is not very elegant, and is certainly not guaranteed to work.

What we need is something a little more elegant that will ensure it has the highest hook priority number. So, how do we do this? The list_hooked_functions() function makes use of the $wp_filter global variable. This holds information about all hooks that have callback functions registered.

What we want to do is to find the highest hook priority number (i.e. the hook with the lowest output priority), and define a NEW callback function for wp_head and give it a priority value of one more than the highest number. The following code will take care of this:

Here, we are assigning the $lowest_priority variable the value of the highest hook priority number, from the array of all priority numbers (for the wp_head hook).

Here is the code for this:

Adding this to our Plugin code and activating it we get the following output: 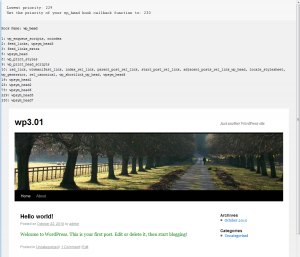 We know that our callback function IS the last one called as it turns the text green, and this style is defined in the wpsym_head7() function (the last callback function we added after all the currently registered hooks were analysed).

Finally let’s take a peek at the page source to verify our findings.

I should point out that the only caveat to this method, as it stands, is that it can’t take into account any other Plugins that are using the plugins_loaded hook to add html to the head tag (as we ourselves are doing). The only thing you can do in this case is to add a suitably high priority number to your plugins_loaded callback function.

I can post a fully working Plugin of this example if there is enough demand. So let me know.